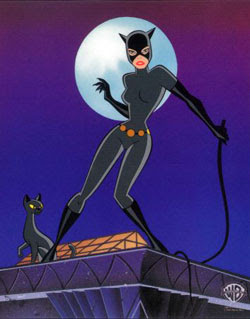 This is a story about the very mysterious, sudden plethora of cats we have, and has nothing to do with Batman.

For the record, let me tell you my background with cats.

As I was growing up, we never once had a cat. We didn’t need to, because our neighbors had cats, and the cats thought we were their extended family. My strongest cat memories involve a certain male cat named Razz, who was forever trying to sneak into our house. He would camp out on our front doormat, waiting for the door to crack open as we tried to sneak out, at which opportunity he would dart in through the door, run through the house, up the stairs, and hide under my parents’ king size bed.

Then we would spend a good deal of time trying to coax out Razz, who never came, until we would be trying to pull him out, which usually involved some scratching or teeth. Suffice it to say, I have not-the-fondest memory of cats.

Fast forward 25 years. When Peter and I moved to the country, we talked briefly about getting a “mouser.” Our slowness to act was partly because 1. I had bad memories of cats, and 2. I had enough small mouths to feed with just my little kids. Then we discovered that we had foxes, owls, a snake, hawks, and plenty of other wildlife to control any rodent population that might consider taking up residence.

Everything went fine until we did construction 2 years ago and put in a pool. The owl left. The foxes left. Thankfully, the snake left. Apparently, the heavy machinery was not their style. We were sad to see them go. So far, everything but the owl and the snake have returned.

Then we had flood season in the country this spring, and they water rose in the dike nearby, and one night I went in the garage and saw a RAT. I was petrified. I had never seen a rat this big (think R.O.U.S.) and it was vertically scaling a wall like nobody’s business. I screamed and ran inside. Peter was thrilled and ran to get a gun. I guess we see things differently.

That’s when the cat talk got serious.

Next thing I know I am at the pet store with Hannah, choosing a spayed, female, shelter cat. I spent $50. In return I got a mousehead every morning for the first few days (she ate the rest of the body), plenty of slain lizards, and not a trace of a rat since May 24, 2011 (the date of acquisition). 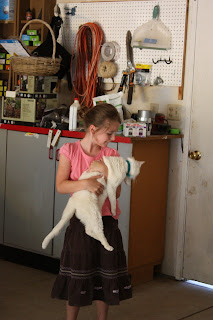 Here is Snow. We love her.

Then we noticed that another cat seemed to be visiting a lot. It was a Siamese cat, who helped itself to Snow’s food in the garage, via the cat door, and was extremely arrogant. Let’s just say I wasn’t thrilled. Dumb cat! Don’t you know we only have “service animals” here? Stealing our poor, innocent, mouse-killing cat’s food! Go find another home! We could see it had a collar, but when we tried to get near her she just took off.

Then one day Peter was in the garage attempting to rebuild a very sad weed-eater. He thought he heard mewing, but ignored it.

We went out that night. We saw a play. When we got home, we were greeted with this letter from Hannah. 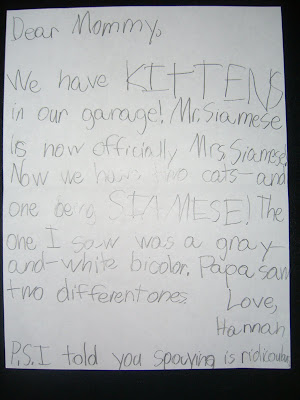 Here is the transcription:

We have KITTENS in our garage! Mr. Siamese is now officially Mrs. Siamese! Now we have two cats - and one being SIAMESE! The one I saw was a gray-and-white bicolor. Papa saw two different ones.

P.S. I told you spaying was ridiculous.

Suddenly, we have 3 kittens. So cute! Even though I can’t stand to touch a cat, these were so CUTE!

So Mr. Siamese is really Mrs. Siamese. She’s nursing the kittens. Awfully cute…I’m sure someone is looking for this cat and her babies. 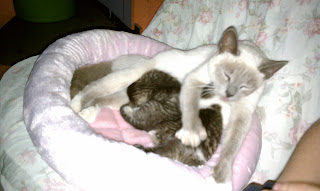 This goes on for a few days, and Mrs. Siamese gets used to us, and lets Hannah pet her enough for Hannah to get a look at her collar – which has no tags. What?! OK, we’ll care for her since she’s nursing. We put out lots of food and water. I remember what nursing is like – you eat and drink a lot!

I asked Hannah if the Siamese and her kittens have names. I suggest Marie, Berlioz, and , the names of the kitties in the movie The Aristocats. (French names sound so exotic, you know.) She replies that she’s afraid to name them because she doesn’t want to get too attached in case we have to return them to someone. Wow, I think to myself, that is a mature thought for my 8 year old.

The next morning she tells me the kittens are named Nicole, Olivia, and Penelope. She then proceeds to write a hilarious letter to her pen-pal and close friend, Kiah, on the way to church.

Here is the letter. 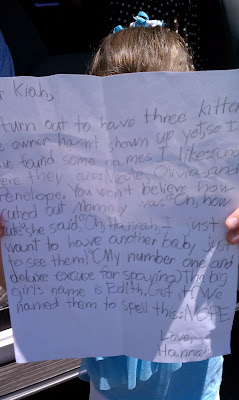 Here is the transcription in case you can’t read it.

It turn[s] out we have three kittens! The owner hasn't shown up yet, so I have found some names that I like: and here they are: Nicole, Olivia, and Penelope. You won't believe how Mommy was "Oh, how cute" she said, "Oh, Hannah, I just want to have another baby just to see them!" (My number one and deluxe excuse for spaying.) The big girl's name is Edith. Get it? We named them to spell this: NOPE!

I'm not making this up! I couldn't.

That was Sunday. Monday brought us 3 more kittens.

My parents rolled in the gate with their windows down, and noticed hawks crying and circling the wood pile. As they slowed down, they heard loud mewing. They told the kids playing outside to check the woodpile, that the kittens had somehow gotten out of the garage.

Yes, there were 3 more. When we retrieved them and put them “back” the original three popped out of their hideout in the garage. They are the same size, and same set of markings. They’ve got to be Mrs. Siamese’s kittens as well. When she returned from her prowling around, she started nursing them all.

Folks, today is Tuesday, and I have 8 cats. Less that 2 months ago, I had no cats. I am not a cat person! Still I found myself at Petsmart today, buying kitten food, and inquiring about spaying and neutering. The last thing I need is even one more cat. Did you know that it costs around $350 to spay or neuter just one single cat? I have seven that need it! I guess Peter and I are going to have to figure this out ASAP.

Somehow chickens are so much easier.

P.S. Any name suggestions for the newest three are appreciated. Something to go with the letters N.O.P.E. would be good.

That is too funny, Debra. I'm NOT a cat person either, but a mouse problem almost pushed me to the same drastic measures. And I'm allergic to cats! Glad I didn't, because we would probably be over run by now! Did you know a rat terrier dog is also very good & "mousing"?

That is too funny, Debra. Fear of a mouse problem almost drove me to the same drastic measures not long ago. And I'm SUPER allergic to cats! Good thing I didn't because we would probably be over run by now. Did you know that 'rat terrier' dogs are supposed to be very good 'mousers' too, and they don't bring you gifts?

And so it begins...What a great story! To think we have had a reversal of fortunes...we are now down to 3! Ours started disappearing or meeting unfortunate circumstances... The kids think 3 is just not enough, but Ted is relieved to only buy cat food for three!

Hadn't checked anyone's blogs in FOREVER, and you're one of our only friends who still seems to be writing -- and what fun to read yours!! What a story! I was going to say what your other friend just wrote: there's low (lower) cost spaying available. We've had cats done at Hope foundation before, too. (Loved Hannah's notes! :-)
~Lori McC